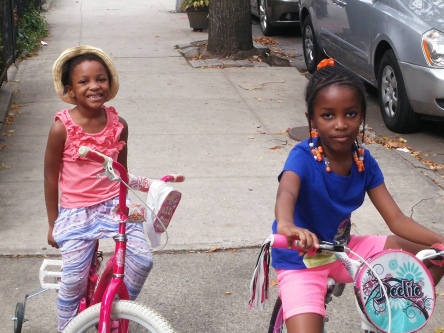 We received an email about two weeks ago from Theresa. Theresa heard about Bike and Brain through people at the The Journey Church. She is currently living in Brooklyn with two young children and their mother. Their father has passed away. These girls are 6 and 7 years old. As a single parent home and with the high cost of living in New York City, bicycles were not high on the priority list for this family. Theresa contacted us to see if we had two childrens’ bikes for the girls. Initially, we were a bit worried because we never had childrens’ bikes donated. However, we figured we would take our chances. We replied back, “ Good to hear from you, I think we can DEFINITELY help you out”.

There was nothing definite about anything. We didn’t have a single childrens’ bike. That made us nervous, to be honest.  Fortunately, we are constantly reminded to trust God with the organization, which eases our worry. He is always using people as his hands and feet to get his work done. That is exactly what happened with these bicycles.

We put out a few messages via social media and within 24 hours we had two childrens’ bikes at the apartment.  Bike and Brain’s reach does not expand that far, so this was clearly an act of God. One of the bikes was donated by a local fire chief who saw our message on Twitter. He was kind enough to bring the bike to work with him so that we could pick it up from his firehouse. It was incredible for someone to respond to a Twitter message and provide us with a donation based off pure faith. It was clear that God wanted these girls to have bicycles. 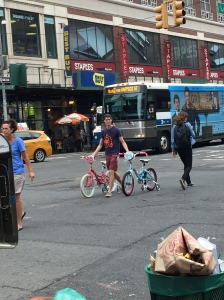 Both of the bikes were in great shape and needed minor tune ups. We all worked together to get the bikes up and running. They were spectacular. Although both of the bikes came from different people, they matched very well. They even came with handlebar pouches! We were all excited to deliver these bikes to the girls.

The way the girls ran over to the bicycles was all we needed to see. They hopped right on and started to ride all over the sidewalk. The moment was perfect. The way God had orchestrated all these moving parts within a few days was miraculous. We started with nothing more than a request and within days two little girls were riding their very own bicycles. Everything connected perfectly, from the donations to the tune ups. It took multiple people and a lot of coordination that wouldn’t have happened without a faith in God. 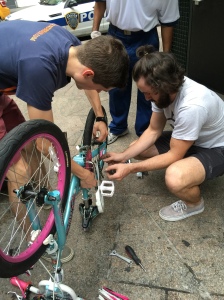 We often take things for granted in life, from the people to the possessions we have. We see a lot of bicycles rotting on the sidewalks in our city, many of which could be brought back to life with a little TLC. Moreover, there are many people in this city that could benefit from these bicycles, but don’t have the means to obtain one. At Bike and Brain we hope to keep connecting these deserving people with functional bicycles.