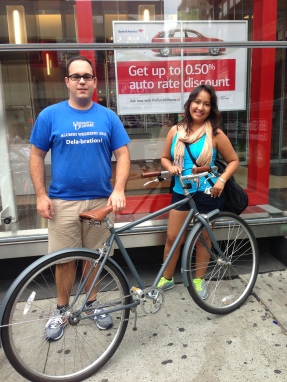 Life has a funny way of working itself out. It seems that, no matter what, everything always comes full circle. That is exactly what happened in this case.

We started Saturday by preparing one of our Brooklyn Bicycle Co. donations for Vicky. All the bike needed was a new seat post and a quick safety check. Thanks to the help we had, the bicycle was up and running in no time. This is a single speed, cruiser style bicycle. It’s perfect for city riding.

The bicycle was initially intended for Vicky (pictured  above on right). She currently lives in Weehawken, NJ and works full-time. Vicky works mostly from her desk and likes to exercise via bicycle when she can.  Vicky likes to ride bicycles through Central Park and other NYC hot spots. She has been renting bicycles each time she has wanted to ride. This has been limiting the amount of riding she can do. We don’t believe there should be a limitation on riding at Bike and Brain. That’s why were excited to deliver this cruiser to her. 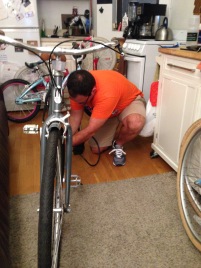 As Vicky approached our meeting spot, we could tell there was a chance the bike as going to be too large. This was something we had not thought about prior, which was a mistake on our part. Many times you can work with a bike that is a bit too big or too small. So Vicky decided to take the bike with her and try it out. About an hour after we met Vicky she told us the bike was most certainly too big. We felt terrible.

Vicky happened to be heading to her Jarana class in Central Park after we delivered the bike. This class is taught by a gentleman named Sinuhé (pictured below). Sinuhé currently lives in a duplex with his wife, his son, two teenagers, and a student from Bolivia. It just so happens that Sinuhé was also in need of a bike and it was the perfect size. Sinuhé explained that he will also share the bike with everyone he lives with. He was excited to bring it home to them. 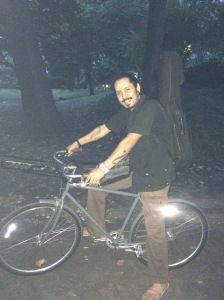 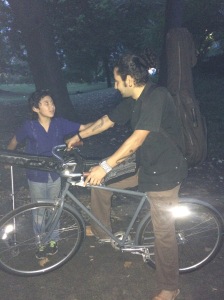 Although we are still working to find the perfect bike for Vicky, this cruiser made its way into the right hands. It will now be shared amongst many people who will ride and care for it. This bicycle came full circle and that is all we can hope for at Bike & Brain.